Angry Birds, the Next Generation 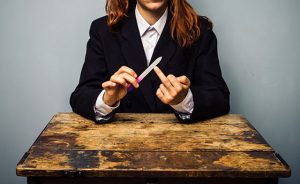 As a teen, I would express my rage against adults by surreptitiously flipping them the bird. Behind closed doors, under the table, in my pocket, wherever I could reliably hide it, my angry bird would speed to its perch and help drain me of my righteous fury.

Little did I realize at the time, that the adults in my life were likely doing the same to me.

The other day, while my 5-year-old exploded into a temper tantrum over the way I had folded a blanket (which was, I should mention, the EXACT @#$%& WAY he had asked me to fold the blanket), I exited the playroom, entered the bathroom, closed the door and let two birds fly.

Catching a glimpse of myself in the mirror, I laughed. It’s been nearly 30 years since I last resorted to secret bird-flipping. The pimples are (mostly) gone, replaced by crow’s feet, but otherwise the image was strikingly familiar. Upper teeth biting lower lip, eyebrows furrowed, two defiant, middle fingers jutting erect between tense knuckles in a stance that radiates heat and hostility.

Startled (and a little impressed) by the muscle memory of the moment, I immediately understood two things: 1. I am not the first adult to flip off her child. 2. When I flipped off my parents, they were probably on the other side of the door, doing the same to me.

Sure, my folks had a few more outlets than I do. For one, spanking was more accepted and, secondly, my parents had a whole second language they could employ when they needed to give voice to their anger.

[Israelis primarily curse in Arabic, and they assumed they could rely on this to cuss me out without my understanding. They were, of course, wrong, but at least now I can supply any Arabic speaker with a detailed description of his mother’s nether region along with some vivid suggestions about what he can do with it.]

As deep a toolbox as my parents had, however, there is nothing more immediately gratifying than flipping your kid the bird. It’s physical, the same way a yoga pose is physical, and is therefore weirdly centering. I have no doubt my parents flipped me off left and right—in the wake of a meltdown, after tucking me in for the umpteenth time in a night or following a demand for cereal after refusing to eat dinner.

But if they did, they did it secretly, expressing their anger inwardly while communicating safety and love outwardly. Kids are glorious, amazing beacons of hope for the world. But they are also energy-draining lunatics. And in those moments when they act in ways that make no sense, they are telling us that they need our help. They need a hand.

It is our job to give them a hand. Even if the other hand is stuffed in a pocket, a single finger stretched out in the middle of it.

Mayrav Saar is a writer based in Los Angeles.