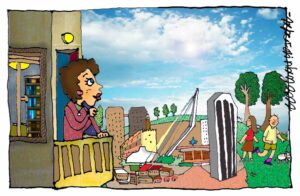 In the months just before the pandemic, nearly five million tourists touched down at Ben Gurion International Airport to experience Israel. Respectively, they came for archaeology, heritage, to hike Masada, pray at the Western Wall or float in the Dead Sea. They arrived from every corner of the world.
My aliyah occurred more than 27 years ago, and I shamefacedly admit that I frequently take these holy visitors for granted. Few of them meander toward my dumpy town that lies nestled between two Arab villages, abutting the highway to the south of the country. We do not boast nightlife, cultural attractions or fine dining. We don’t even have a coffee shop. (In August someone tried to operate a shawarma stand out of a refurbished minivan and it lasted all of eleven days.)
However, when planes stopped coming due to the Covid scourge, I awakened to the delicate nature of the travel industry. I discovered that many of my clients were—or married to—tour guides. Incomes dried up overnight and a wealth of Israel-centric passion and knowledge abruptly lay fallow. Many of these people retrained to become on-line teachers, technical writers or to pursue other reputedly stable careers in a suddenly shaky universe. Consequently, many of us became sensitized to that precious commodity called Tourism and prayed for a return to the days of overflowing restaurants, bumper-to-bumper-taxi traffic and desert camel-rides.
I tried to keep the aforementioned thoughts in mind over the recent holiday season when I could not get a table for two in any restaurant in the city. I wanted to take my visiting sister to a favorite eatery and was gobsmacked to learn that it had been fully booked through mid October before Rosh HaShanah even began. Apparently, phone reservations were just foolhardy. I parked my dented jalopy in the beautiful Mamilla Complex garage and meandered from restaurant to restaurant, attempting to negotiate the queues that formed along the elegant boulevard. Hopeless. With growling stomachs, Sis and I raced back to the car and tried to find parking at the refurbished First Station, the German Colony and even hotel bistros. By the time we realized that we could not compete with the well-heeled English speaking crowds, I aimed my headlights towards the lesser known joints in a simpler part of town.
With Hebrew-only menus, my corner of the world boasts more falafel and less focaccia and little awareness of the international maelstrom that plays out only a few kilometers away during tourist-season.
And then, it was over. October ended and the children returned to school. The Sukkahs came down and most of us went back to work.  Tour guides – those special individuals who bring the Holy Land to life for millions upon millions of people – began preparing for the upcoming Hanukkah rush. The newer American immigrants ordered hard-to-come-by turkeys for Thanksgiving, holding on to an emotional vestige of the life they left behind.
Joni Mitchell’s song, Big Yellow Taxi, includes an eerie line of prose which states, “You don’t know what you’ve got ‘til it’s gone.” When tourism does not directly impact our lives, it is easy to dismiss the impact of this mighty, economic engine. If visitors want to purchase Hebrew name-necklaces or demand ‘half-caff’ lattes that make post-army baristas chuckle, let them. Their absence did not make for a better Israel and we are blessed by the energy and drive that accompanies their curiosity and moxie.
The gates are open and it is only right to say, “B’ruchim Habaim.” Welcome Home!

New York native Andrea Simantov has lived in Jerusalem since 1995. She writes for several publications, appears regularly on Israel National Radio and owns an image consulting firm for women.

Mendelson and Modesta The paths of two minority communities in early Orange County, Hispanic (mostly Mexican) and Jewish, usually didn’t overlap, but it was a...
Read more
November 2022

Two Chefs, Two Unique Thanksgivings Lucky us – Jews get to celebrate two Thanksgivings! Some say the Pilgrims had Sukkot in mind at the first...
Read more 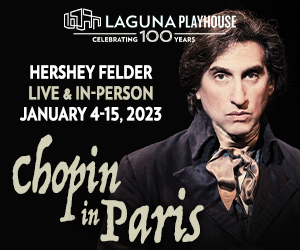