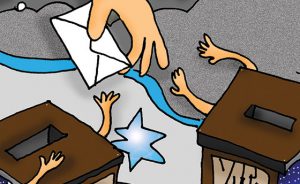 It might feel liberating to say that Israelis do not care about the American elections, because it has nothing to do with us. But this number is few. Alternatively, there are some Israelis who believe that, if left to our own devices, we could emerge as a world power that is not beholden to any nation on earth. My late father was such a Jew; he believed with all of his raging heart that, left to our own devices, Israeli ingenuity and raw nerve could meet our security-challenges head on and that outside assistance has rendered us lazy. This belief is not a majority view. The accepted understanding is that we need American support like the body needs oxygen.

The elections matter to Israel because, although Daddy didn’t like it, our military edge and relationship with the nations of the world rely heavily on American generosity. Even when the outstretched Western hand comes with difficult conditions, Zion must appear grateful. As a frequent reader of op-ed pages in both the Israeli and international press, it remains abundantly clear that we are better liked when we behave subserviently. Good Jews might be dead Jews, Daddy, but today’s defiant Jew often finds himself isolated.

Many American Jews, along with plenty of Israelis, seem convinced that one candidate might be better for Israel than the other. If my Facebook page accurately registers the passions of the well-versed common man, electing the “wrong” candidate will spell the end of the Jewish state.

Years ago, as I was becoming more deeply connected to Jewish observance, I learned the word hishtadlut, best translated as “effort.” Lectures on hishtadlut include distinctions between bitachon/trust and emunah/faith. Hishtadlut is not a suggestion in Judaism. It is a commandment.

But raw persistence can become ugly if we believe that the outcomes which affect our lives depend solely on effort. There is no place for such egocentricity in a healthy society, even when pundits and celebrities claim otherwise. Threats to leave America or stage mass protests because the democratic process may leave one wanting is childish and arrogant. Democracy demands bitachon, a fallible-trust that may be imperfect but respects the ebb-and-flow of human existence. Celebrating kindness and acceptance, Judaism teaches us that minor or majorly distasteful differences should be tempered with a mutual desire to make our shared existence harmonious.

One might be terribly repelled by the candidates for the presidency. Those who live according to the respective tenets of histadlut, bitachon and emunah—Jewish or non-Jew—are better aware of the role they play on the stage of history. It is the experience of acquired faith that allows us to sleep at night, safe in the knowledge that after doing one’s part with a full heart and possession of a few available facts, each man, woman, village and nation will rise to the challenge of the morning after.

New York native Andrea Simantov has lived in Jerusalem since 1995. She writes for several publications, appears regularly on Israel National Radio and owns an image consulting firm for women.