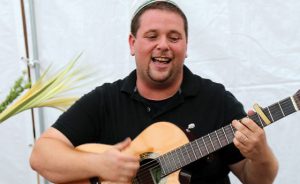 Temple Beth Tikvah is honored and delighted to welcome its new rabbi, Rabbi Nicolas Socolovsky, and will be celebrating his installation the weekend of August 26-27, 2016.

Rabbi Nico, as he likes to be called, was born in Buenos Aires, where he became involved in the Jewish youth movement, eventually advancing to become director in Buenos Aires, and later in Nahariya and Haifa. He moved to Israel in 2002, when his family made aliyah, and attended the University of Haifa. Rabbi Nico graduated with his BA in Education and Jewish Thought, and his MA in Jewish Thought. He was ordained at the Hebrew Union College in Jerusalem in 2013, after completing his final year of studies in New York.

Rabbi Nico has worked in many different social frameworks, with teenagers, immigrants, ex-prisoners, underprivileged families, and others. In addition, in 2010, Rabbi Nico initiated the “Shchuniya,” a Jewish community in a neighborhood in Haifa, out of the belief that Jewish life should be created where life is. At the Shchuniya, Nico was initiator, rabbi, music director, guitar player and fundraiser. This minyan has grown organically,  to be a thriving reform synagogue in Haifa today. Rabbi Nico dedicates his rabbinical work as a community leader and educator to “facilitating values and connecting Judaism everywhere.”

I recently spoke with Miriam Van Raalte, the Director of Community Engagement and Communications, about the exciting changes happening at Temple Beth Tikvah. She would know too, since she has been a member of Beth Tikvah since 1966 when she was just a young teen. “I know everybody here and my new job is to engage our congregants as a congregational family—to enhance relationships.” When she spoke about the recent addition of Rabbi Nico, her voice immediately changed to excitement and enthusiasm. She couldn’t say enough nice things about the new Rabbi, and the impact he is having in the community and their congregation.

“People are coming through the doors—they are curious to see what he’s all about,” says Van Raalte. “He has this contagious energy and style that people are really warming up to. He is so approachable and really engages with the congregants and is a great teacher. For a thirty-four year old he has more knowledge and information than most scholars twice his age! He holds a monthly ‘lunch and learn’ on the second Saturday of every month, and truly elevates Shabbat services. Shabbat is very important to Rabbi Nico and he really tries to make it special and stand out from the rest of the week, with little touches, from the music to the china dishes used at Shabbat meals.”

Van Raalte continues, “He also brings his commitment to Israel to the congregation—the congregation commemorated Yom HaZikaron and Yom Ha’atzmaut, and had a special Havdallah with an Israeli flavor. Rabbi Nico’s energy and input have brought so much excitement and a breath of fresh air to the congregation, and everyone can’t wait to see what’s happening next.”

Temple Beth Tikvah is a warm and welcoming reform synagogue, the center of Jewish life in North Orange County. They foster personal, spiritual and intellectual growth while developing a close community feeling through meaningful spiritual, educational and social experiences.

The congregation includes Jews by birth, Jews by choice, interfaith families, singles and families of all configurations. They are an inclusive and a spiritually and socially diverse house of worship, and welcome all people on their Jewish journey who wish to explore more about Judaism.

Temple Beth Tikvah believes in lifelong Jewish learning, and provides education for your entire family. They offer a complete pre-school program for children ages 2-5 that is well-respected in the community. Religious and Hebrew school serves children from kindergarten through high school. The youth program gives youngsters an opportunity to form meaningful friendships with others while getting involved in leadership roles and community service projects. Adults can choose from many social and educational programs that meet throughout the year (including the very popular weekly “Bagels and Torah”).

Their services celebrate the joy of being Jewish, with life lessons that tie Torah to the world of today. They are a caring community that reaches out to each other in times of celebration and sadness. If you seek to explore or deepen a connection to Jewish life and community, please join them.

For more information please visit: www.tbtoc.org, and be sure to check out Rabbi Nico’s blog: povesham.org/author/nicosoco/.

Music of the Temple & Beyond