The Original Queen of Sass

Rita Rudner is a delight! From her hilarious dead pan answers to her timeless jokes about men and children- one of my personal favorites bears repeating, “My husband and I are either going to buy a dog or have a child. We can’t decide whether to ruin our carpet or ruin our lives.” This woman had me in stitches from the moment we met. I had the great fortune to interview her recently at the lovely Laguna Playhouse where we talked about everything from our bust lines to secrets to a successful marriage. Rita’s new show, Act 3, debuts on January 5th and runs through the 31st. She also talked about her yearly tradition of ringing in the New Year at the Laguna Playhouse. Watch the entire interview below!

What can we expect from your show, Act 3, which premieres Jan. 5th at the Laguna Playhouse?  First, I want to mention the fact that we both have beautiful bust lines. (I say thank you and agree!) Not many women have the beautiful bust lines that we’re sharing with you today (I’m already giggling—it just went from Inside the Actor’s Studio to Hooter’s After Dark)

Ok now I’ll answer your question. I’m very excited to be doing Act 3, the writer and producer sent me the script and they originally wanted me to do it in London, I said I can’t do it in London I have a family! BUT I do have a beach house in Laguna Beach, and I will do it at the lovely Laguna Playhouse. This play was so funny, and so original, it was a challenge—and I love a challenge because you can’t just rest on your laurels—they’re very uncomfortable, I find laurels are uncomfortable (classic Rita Rudner). I was very excited when Laguna Playhouse decided to do it with an actor named Charles Shaughnessy who was the very handsome father on the TV show The Nanny and he has done lots of stage work and when I forget my lines he’s going to tell me what to say—No I’m kidding I’ve already memorized the play… everything is good and we’re in good hands.

I’m curious to know about your comedic influences growing up?  I was never funny growing up. I was a ballerina. I was in a ballet company when I was 10, I danced on Broadway and started professionally dancing at 15—I never wanted to be anything except a dancer and when I was in my 6th Broadway show, I was 26, or I don’t know something like that. There were too many dancers, too many actresses and too many singers, there aren’t very many female comedians I’ll be that! And then I started to do it and I loved it so this is kind of my second life. But I love it, I’m so glad I did that. And now I’m doing a play… third life…. ACT THREE! (She gives a hand motion saying it all comes together)

We are a Jewish magazine, what is it about Jewish comedians and Jews in particular that makes us so funny?   Nothing is funny if everything is going right. And I think we have had a lot of turmoil in our past and most people have turmoil in their present, I turned it into humor. I’m very lucky that I’m happily married and have the best little girl in the world and my dog is perfect, but you know growing up my mom was sick and I was having to deal with a lot of tragedy in my life so I think that when you have tragedy and you can deal with it in a humorous way it lightens the tragedy and I think that’s why a lot of Jewish people are funny.

In your book Rita Rudner’s Guide to Men, you discuss men and dating. What is some advice that you can give us single gals? I have a few jokes, I can’t say that they’re going to help you for real but they’ll be entertaining… Always date a man who has a pierced ear, ask me why? (I chime in…Why?) They’ve experienced pain and bought jewelry—HA HA! You can tell a lot about a guy by the way they play a game, I was playing tennis with this one guy, he couldn’t say thirty love… he kept saying “thirty I really like you but I have to see other people.”

I’m fascinated by the comedy world and how you’ve been able to maintain a really normal grounded life, a healthy marriage, a daughter, a dog, a home—what’s your secret?  My husband and I have been married for 27 years, almost 28 years, and we’ve been very lucky in that no other person has found either one of us attractive. No, but seriously I put my marriage first all the time and my daughter comes first in my life—my life comes before show business. Show business is going to go away. My family is going to be there so that’s why when someone asked me to do this play in London over Christmas I said “hey that’s not gonna happen.” And even when I was asked to be in movies and on the road in a trailer for four months I said “no I’m married.” Also, my husband and I work together, we met because he produces comedy shows and I perform comedy and he is directing the play, Act 3. He’s directed movies, he’s written movies and I figured he tells me what to do all the time you might as well get paid for it. We worked for three years before I dated him, so it’s our dynamic.

(She then tells me that since I’m a single girl she thinks I’m going to meet someone through my work and I’m doing interesting work so it will happen… But don’t do this—she does a swiping motion ie: dating apps).

What would you tell your 30-year-old self that you wish you knew at the time?  Things are gonna get really, really good really, really soon! I was floundering and not in the best of relationships before I met my husband. I’m the type of person who likes to be with somebody and it’s kind of a comfortable feeling for me so at 30 everything got better.

Do you think that it is difficult being a woman in comedy? How has it changed from when you first started?  It’s much more accepted now. I chose comedy because there weren’t many female comedians, and there still aren’t that many, but I think this is a great time for women I think funny women are being cast as the lead in movies for the first time. It was always the funny man and the model, the funny man and the gorgeous blonde woman, now we have Tina Fey, Amy Poehler, Melissa Mccarthy, and Kristen Wiig—they’re all fantastic! For a long time only funny men transferred into movies. I think it’s all changing now and it’s fantastic!

What am I doing on New Year’s Eve? Where am I going?  You are coming here! This is a tradition now, every year I play the New Year’s Eve show at the Laguna Playhouse. It is the most civilized New Year’s Eve experience because it ends at 9 o’clock in the evening and they celebrate with New York, and they have a big screen with the ball dropping and everyone has champagne and chocolate covered strawberries-—you can go home before people get too drunk and then you can watch the parties on television, which is where you should be on New Year’s Eve, you should be home!

Also, my daughter Miss Molly Bergman, she opened for me last year because she was 12, so it’s time for her to work (she says in her classic dead pan). She’s a singer/songwriter who sings original and cover songs. She performs at the Kaleidoscope Mall and all over Orange County and you can check out some of her music on YouTube under “mollybmusic.”

Rita is still the Queen of Sass in my mind and funny as ever. You know where this girl will be for New Year’s. Be sure to book your tickets for the New Year’s Eve event and Act 3, which is running from Jan. 5th-31st at the Laguna Playhouse. For more information, contact The Laguna Playhouse (949) 497-ARTS (2787) or ticket_office@lagunaplayhouse.com. 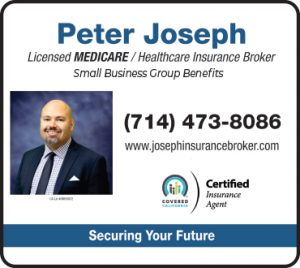 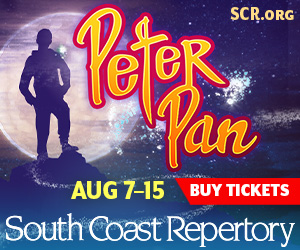