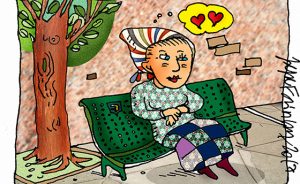 IT WAS A Friday night like many others. Candles lit, table set, side dishes plated in my favorite pieces of pottery. The challahs were still warm, proudly sitting beneath an embroidered cloth; my damp-from-the-shower hair was neatly tucked inside a colorful headscarf.  The sky rapidly darkened to an inky blue-black from which stars popped out from their hiding places in rapid succession. Inhaling the mingled aromas of roast chicken, Persian rice and steamed brussel sprouts, I locked the door behind me and descended the dark stairwell toward the building’s exit.

At the entrance of the parking lot sits a bench. While I’d like to report that it is rustic, permanently etched with the initials of lovers, weatherworn and reminiscent of country lanes and county fairs, I can’t because it’s not. It is the municipality’s standard issue of tempered steel mesh design and painted green, embossed with Jerusalem’s Lion of Judah logo. Thousands of these dot the city and, like ugly water tanks that pepper the roofs of the city’s skyline, one gets used to it.

Wrapped in a shawl, I sit on this hard steel bench and, for the first time in a week, do nothing. No agenda, no deadline, nothing to do but watch young couples, singles and old men wind their respective ways toward Sabbath dinners. The only passing cars belong to Arab neighbors going to weddings and other social engagements. No one in Jerusalem is unaware of the holy Sabbath, regardless of whether or not they observe any/all of Her precepts.

I bask in the quiet, watching for my husband’s return from synagogue. My bench faces a winding side street that houses both the Sephardic and Ashkenazi shuls and neighborhood ritual bath: the mikvah. I always spot him in the distance because his white shirt reflects the street lamps’ glow and, often, he is holding a few papers/booklets for me. I wait anxiously for these religious writings, a melange of essays that relate to the week’s Torah readings and related topics. Over time our meeting at the bench has morphed into an odd ballet; he sits alongside me for a few minutes and, together, we look out at nothing.

Years ago I attended a lecture on the topic of ‘Love.’  The speaker opined that when couples date, they spend an inordinate amount of time gazing into one another’s eyes. Chronic deep gazing can convince potential partners that they are deeply in love because they believe they’ve seen into the other’s soul. She contended, however, that when one stares intently into the eyes of another, they most likely see a reflection of themselves. This might convince the gazer that he is on the same page as his beloved, shares the same thoughts and aspires for similar goals. Why? Because they have merely seen themselves. Imagine the surprise when, after all of that co-ogling, they learn that they have less in common than once imagined. Sadly, this can sometimes take years or decades. . . . .

My teacher suggests – and I concur – that the real connection between people comes when they look in the same direction and see the same things. The same pains, joys, desires, fears. When they look at a like-horizon and, consequently, their two hearts beat as one, a more rooted foundation is forged for the years and potential struggles – and joys – that await.

As we either tip-toe or race into the unrealized days of the New Year ahead, my only ironclad resolution is to keep the love-lesson of my Sabbath bench close at hand, accessible on demand.
New York native Andrea Simantov has lived in Jerusalem since 1995. She is a contributing write to Jlife magazine.

Something Sweet, Something New