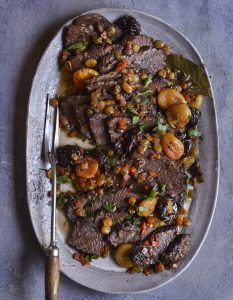 If you ask most Jews to name their favorite Jewish foods, brisket would be high on the list, along with bagels, knishes and kugel, none of which were invented by Jews, by the way. Impoverished Jews of Eastern Europe’s shtetls could not afford the more tender cuts from the rib and chuck, but talented cooks created delicious dishes from the cheaper, less desirable parts of the cow, such as the brisket.
“Brisket is the meat covering the cow’s breastbone, situated between the foreleg and below the short ribs (flanken),” explains rabbi and food historian Gil Marks in the “Encyclopedia of Jewish Food” (Wiley, $40). “Ashkenazic brisket is always made with onions, and plenty of them. After the mid 19th century, potatoes and carrots were frequently added to provide more sustenance. In early 20th century America, as Eastern European immigrations began rising up the socioeconomic ladder, brisket would often appear for Sabbath dinner and other special occasions, converting a rare treat into regular Sabbath and holiday fare. Soon American Jews began adapting brisket to contemporary taste and using new commercial condiments, for example, glazing the meat or adding canned cranberry sauce, onion soup mix, and/or chili sauce.”
In America brisket has been prized by non-Jews as well for braising, barbecue, smoking and curing. And when it comes to any of those techniques, award-winning author and TV host Steven Raichlen wrote the book—literally—31 books in all, including the international best sellers “How to Grill,” “Barbecue Bible,” “Planet Barbecue” and “Project Smoke.” Now this “Gladiator of Grilling,” as Oprah dubbed him, has written the ultimate brisket cookbook, “The Brisket Chronicles” (Workman, $19.95), including his 50 best brisket recipes with step-by-step foolproof instructions, whether you want to barbeque, grill, smoke, cure, boil or, of course, braise it.
“Long before my indoctrination into barbecue, I ate brisket,” Raichlen writes. “So did every other Jewish kid in the neighborhood. Brisket was the ultimate holiday dish, and nobody made it better than my aunt, Annette Farber. Braised for hours with onions and carrots and sweet red kosher wine (was there any other kind?), lavished with apricots, prunes, and other dried fruits, it was the sort of sweet-salty, meaty-fruity mash-up typical of so much Ashkenazi cuisine. These days, my family is more likely to eat our brisket slow-smoked like they do in Texas, but at least once a year we dust off Aunt Annette’s recipe for a braised brisket that transcends wood smoke.”
Note that by carving the brisket midway through the cooking process, it slices quite neatly and the slices are all bathed in the cooking liquid, resulting in a more tender and flavorful dish. Be careful not to over-trim the meat, he advises. You can use a roasting pan covered tightly with foil if you don’t have a Dutch oven, but a Dutch oven is preferred. Finally, if you like, add a peeled, seeded, sliced lemon, as Aunt Annette did, to offset the sweetness of the dried fruit.
“The Brisket Chronicles” offers tips and techniques for choosing the right cuts as well as handling, prepping and storage; recipes for accompaniments, such as slaws, salads and sauces, even a brisket chocolate chip cookie!—don’t knock it until you try it – and whole chapters devoted to what to do with leftovers, such as the Ultimate Brisket Hash featured here.
“This recipe calls for barbecued brisket, but equally delectable hash can be made from homemade corned beef or pastrami,” notes Raichlen. “I believe in leftover brisket for breakfast—especially in hash. This one derives its firepower from poblano peppers and sriracha. Hash is infinitely customizable: swap the poblanos for bell peppers, for example, or the potatoes for yams or yucca. If you’re used to the usual corned beef hash, the intense smoky flavor of this brisket hash will come as a revelation.” When subbing corned beef or pastrami for the brisket, use onions instead of shallots and red or yellow bell peppers instead of poblanos. Raichlen also suggests replacing sriracha with Louisiana-style hot sauce such as Crystal or Tabasco.

Transfer brisket slices to platter. Using slotted spoon, transfer fruits and vegetables to platter and arrange around meat. Pour pan juices into gravy boat with fat separator. Spoon some gravy over meat and fruit, serving the rest on the side. Sprinkle remaining 1 tablespoon of parsley over meat and get ready for Jewish holiday awesomeness.

2 or 3 shallots or 1 small onion, peeled and finely chopped (¾ cup)

2. Stir in brisket and potatoes; continue cooking until potatoes are browned, 3 to 5 minutes more.
3. Meanwhile, heat oil in medium skillet over medium-high heat. When oil starts sizzling, crack in eggs. Fry until cooked to taste, flipping once with spatula, 2 minutes per side for yolks that are still a little runny (that’s how I like them).
4. Stir Worcestershire sauce and sriracha into hash and cook 1 minute. Add salt and pepper to taste. Hash should be highly seasoned. Serve right from skillet, sliding fried eggs on top. Sprinkle with chopped chives and dig in.

Jlife Food Editor JUDY BART KANCIGOR is the author of “Cooking Jewish” (Workman) and “The Perfect Passover Cookbook” (an e-book short from Workman), a columnist and feature writer for the Orange County Register and other publications and can be found on the web at www.cookingjewish.com.

Everyone can agree that 2020 was a year like no other. While most activities in the Jewish community are still being conducted on a...
Read more
January 2021

What criteria should be used to determine which population groups in the United States should be first to receive the COVID-19 vaccines once they...
Read more
January 2021

Caveat Statement: Although you’re reading this after the holidays, I’m writing this before they even begin! Election results are in, we’re experiencing a rise...
Read more